The long awaited visit to the doctor occurred this morning. I had expected that with an MRI, X-Rays and Ultrasound I might have some answers to the pain of the last 3 months. That did not happen. The doctor talked about managing my pain.

I only take Panadol when needed. He also talked about looking at a video about pain. Then suggested I take up Tai Chi and Yoga. Then after telling me I should be looking at pain management alternatives he prescribed Lyrica. I have been doing pain management and exercise for at least the last 20 years. But when my back muscles go into spasm’s no amount of exercise and walking changes that fact. I will always have Spondyliolithesis and that will never change. The vertebrae will always be out of alignment, the disc between L5 and S1 will always be compressed and pinching the nerve. So, while the muscles are in spasm I will need pain killers. When the muscles settle down I can start walking and do my special exercises again. So far that has been months and may be many more months before I am temporarily better…until the next time. In the meantime he wants me to take 25Mg of Lyrica twice a day for a week then increase it to 50Mg twice a day for another week. Then we review pain and a Care Plan with the Phsyiotherapist.

After lunch I drove to the C-Bus Stadium at Robina for a group job interview. Time will tell if I am suitable material for a Casual Customer Service Event Day Staff.

Today, at the suggestion of the doctor I went searching for a Physiotherapist at Runaway Bay. The idea was to discuss my needs with them and come to an agreement about costs and a treatment plan. I spoke with the head honcho. It seems that if I get a referral via the doctor for a Care Plan I can get a $53 rebate from Medicare. The head honcho drew up a diagram of what he thinks is my problem – he is yet to see the X-Rays etc and the attendant reports – and a suggested treatment plan. His fee is $120 per session, less the $53 rebate. He suggests I see him initially, he reads the reports and looks at the X-Rays, he draws up a treatment plan, commences treatment and gives me exercises to do at home. Thereafter I see one of his colleagues at $85 a session.

Received an email from C-Bus Stadium. I was unsuccessful with my job application. Oh boo hoo , sob sob. I am crying dry tears. Naah, not really. It was just an application for a job to earn some pocket money and get involved with something happening in the community. I was not depending on the job.

Now my time is free for something else.

The forecast rain began last night about 10pm. Lightly at first then gathering intensity. I was lulled to sleep by the sound of rain.

I was woken at 4.30am by the thunderous roar of rain, then by thunder and lightning. The rain really came down with a vengeance as follows.

300mm overnight, 145 mm in just 2 hours 4am to 6am. I walked along my street which was mostly clear and drains were working as a drain should, even with torrential rain. Further along the street things were not working so well.

The drains from the multi- story complex next door must have been blocked. Their drains were overflowing into my neighbours houses across the street. The water ran across their backyards, under the house and through their garages and any ground floor rooms and poured into the street. Along the way this torrent of water picked up any debris which in turn was too big or too many for the drain which had become blocked. The water still continued to flow into the street and backed up. Further along the street where our caravan parking are is located the water was about 600mm deep, so deep it was running through the caravans at floor level. There was some debris here but the water was so deep the drain had a whirlpool spinning in a wide circle around the drain.

The swimming pool was overflowing. Like most pools this is designed to have an overflow system so the water level never exceeds a certain depth and is drained off quickly. The rainfall was so heavy over a period of time the drain system could not cope. 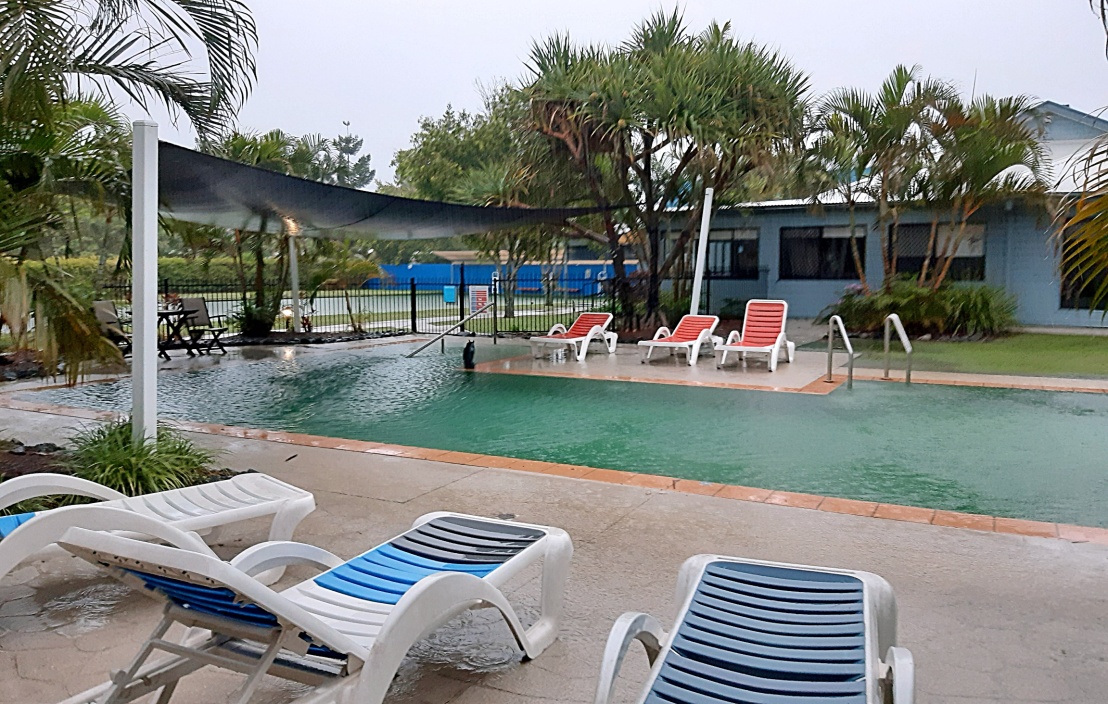 The bowling green was a small lake with a depth of 300 mm.

At the end of our street is our private park which faces Biggera Creek. The creek is normally a placid water way with the only movement of the slow and steady tidal movement. Today the creek was a raging river with the current going only in one direction – flowing towards the ocean. Luckily the tide was still on its six hour run out for low tide. Had the tide been incoming over the last few hours, many houses (not in our village) which were low lying would certainly have flooded.

Tonight we had been invited to a barbecue and some music and dancing at the clubhouse by friends, Frank and Kay. It was a nice group of 18 Rock and Rollers. Although my back is still not up to performing the gyrations required for dancing, I was able to do a few line dance movements which are a bit easier. My favourite dancer was there as well but once again my back problem stops me from enjoying my night to its fullest.

I have been nicknamed music man as I supplied all the rock music for tonight. Unfortunately I did not have time to set up Playlists and apart from the line dancing, had to select each song by standing at my ancient, original, iPad.

Enid was asked to dance by some very accomplished dancers and the glowing look on her face was wonderful to see.

Somehow the night which seemed like it was only just beginning, disappeared. By the time we got home it was almost midnight.

Although there were threatening big black clouds in the north and fluffy white cauliflower type clouds in the south the day stayed hot and humid. The expected thunderstorm and rain did not happen. Enid and I drove to The Spit. Although the Gold Coast seemed chocked with cars we found somewhere to park and enjoyed my favourite walk to The Spit Light station and back along The Gold Coast Waterway along the Doug Jennings Park walkway as far as Moondewarra Beach and back to the car.

We had fish and chips at the delightful Seaway Kiosk which serves up a huge menu of mostly seafood. We had a great long walk followed by a great lunch. My back pain permitting.

AT THIS POINT I WOULD LIKE TO MENTION THAT IN THE NEAR FUTURE I MIGHT BE CHANGING PLATFORM ADDRESS ONCE AGAIN. I HAVE BEEN WITH WORDPRESS.COM FOR A VERY LONG TIME. THEY NO LONGER SUPPORT A  FREE PLATFORM. MY CHOICES ARE TO BUY MORE DATA SPACE ON THE CURRENT PLATFORM OR CREATE A NEW PAID PLATFORM OR MOVE TO A DIFFERENT FREE BLOG HOSTING PLATFORM PROVIDER. I WILL INVESTIGATE ALL OPTIONS AND MAKE A DECISION SOON. IF I CHANGE TO A NEW SITE DETAILS WILL BE SHOWN HERE BUT WILL ALSO CONTINUE TO BE MADE AVAILABLE VIA MY FACEBOOK PAGE.