Rain, heavy at times and a lightning and thunder show.

Once again rain is on and off today along with thunder and lightning.

I had an appointment with a physiotherapist today. She told me she could see that when asked to do simple movements my back and chest muscles operate in spasms. She massaged the main problem muscle in my back and made an appointment for me to have hydro therapy next week. The massage gave me some relief and I slept well for 7 hours.

Another day of thunderstorms, heavy overcast and rain, often very heavy. The bowling green is a pond and the swimming pool is overflowing.

On one of the photo sites I Administer, somebody posted a photo of early hard hat diving apparel made out of leather. It reminded me that my uncle, Bill Gray, established a dive business in 1945 after the war.

The business still operates today and is thriving. It operates 24/7 365 days a year to cater for the needs of its clients.

Of course my uncle is long gone but the business name lives on. https://www.graydiving.com.au/about-us.php

There is still some pain today but nothing like the pain I have been experiencing for months.

Maybe, just maybe I am beginning the comeback to a normal healthy pain free lifestyle.

Tropical Cyclone Eusi which formed in the Coral Sea near Noumea and is tracking along the Queensland coast is bringing lots of heavy rain. Here on the Gold Coast it just seems non- stop heavy buckets of rain, louder and heavier as the hours rolled by. Of course it was accompanied by lightning and thunder. It was just a good reason to stay home. The seas have been producing bigger swells each day and by tomorrow and Friday expected to reach four metres. Already warnings have been issued to stay out of the surf unless you are a really exceptional experienced rider. All beaches have been closed.

The rain is, if anything louder and heavier this morning. For hours I wondered if it would let up long enough for me to drive to the airport to collect Frank and Kay. The rain stopped for awhile and I got excited it would stay stopped. Nope, just as I was leaving I heard on the radio the heaviest falls are at the northern end of the Gold Coast and to expect minor and localised flooding. I did not want to hear that.

I decided not to drive the M1 as with heavy rain, a speed limit of 110 KPH and hoons it was a recipe for disaster. The Gold Coast Hwy seemed like a better but slower option. If there were floods or accidents it would be at slower speeds and more people to help. The rain did not ease off. Within half a kilometre I encountered my first flooded road and of course there are hoons of all ages who think it best to race through floodwaters sending up big waves and showering cars and people and sending waves into homes and businesses. As I got closer to Surfers Paradise the rain eased and the further south I travelled the rain was less. By the time I reached Coolangatta Airport the suburbs were dry and had not had rain for hours. It was still raining at home! After collecting Frank & Kay we decided to come home via the M1. But first we drove to Coolangatta to see the huge waves at Kirra, Greenmount and Snapper Rocks. There was no parking anywhere. A huge crowd of sightseers had descended on the Cooly to see the action. We could only see the action as I drove slowly, one eye on the road one eye on the surf. How I would have loved to have stopped somewhere and walked back to see the action. All was Ok until we turned off at Helensvale where we reached a Police partial roadblock. Some cars were continuing so I did too. The first flood was about knee deep, flowing quickly and several cars stalled. One was stalled in the first lane and a 4WD had stopped to offer assistance which blocked 2 lanes. I was forced to drive near the shoulder to get around them. That patch of flood was about 200 metres long. The next was probably a bit deeper and I could feel the flow of water pushing at the car. A hoon in a 4WD came rushing through sending a huge wave over us. Sorry no photos. I was too busy concentrating on driving while Frank and Kay were putting finger impressions in the upholstery for anybody to take photos. Once we emerged from the last of the flooded sections we noticed the only other cars which came through were 4WD. I did well in my low slung i30.

Friday 14th February. Valentines Day. I looked everywhere around the house but found no cards with love words, no boxes of chocolates or bunches of roses. I did find the load of washing from yesterday which I had hung on an inside clothes line were still a little damp. I guess there is no Valentine for me this year.

The surf at Snapper Rocks, Greenmount and Kirra Breakwater was huge and televised around the world. Some big name surfers were here for the 4 metre monster waves. Big seas are still expected tomorrow but nothing like the monsters of today.

I plan on being at Cooly in the morning. Full batteries and empty memory cards in the camera.

I drove to Cooly and as expected it was crowded but I managed to get a parking spot and walked to Greenmount Point for my first lot of photos. 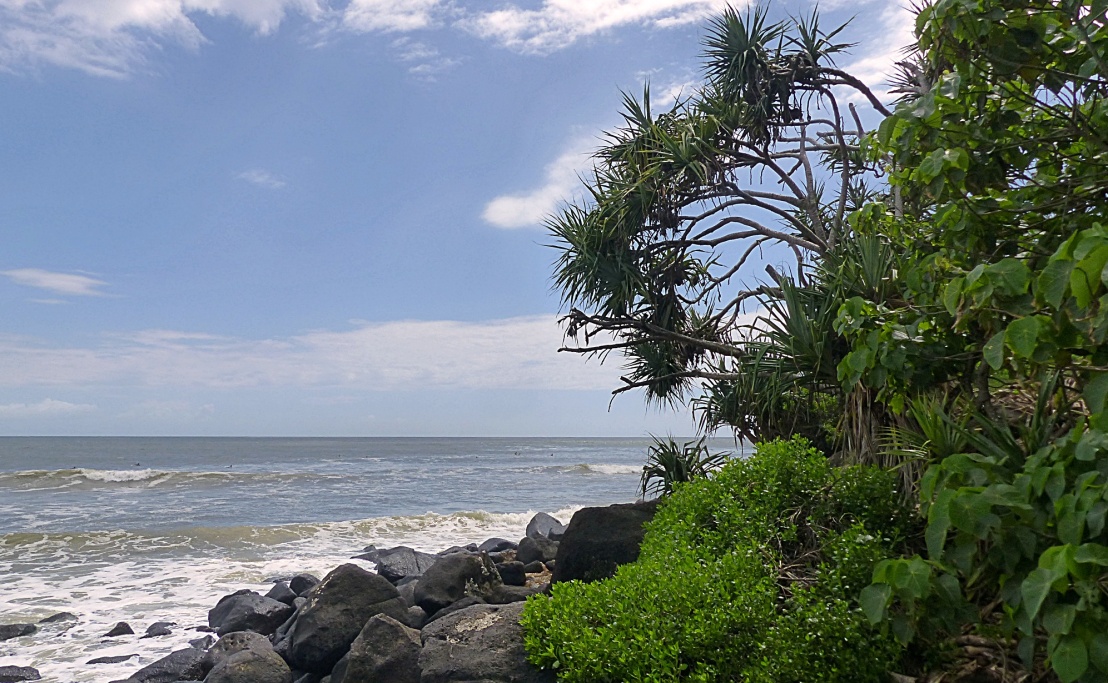 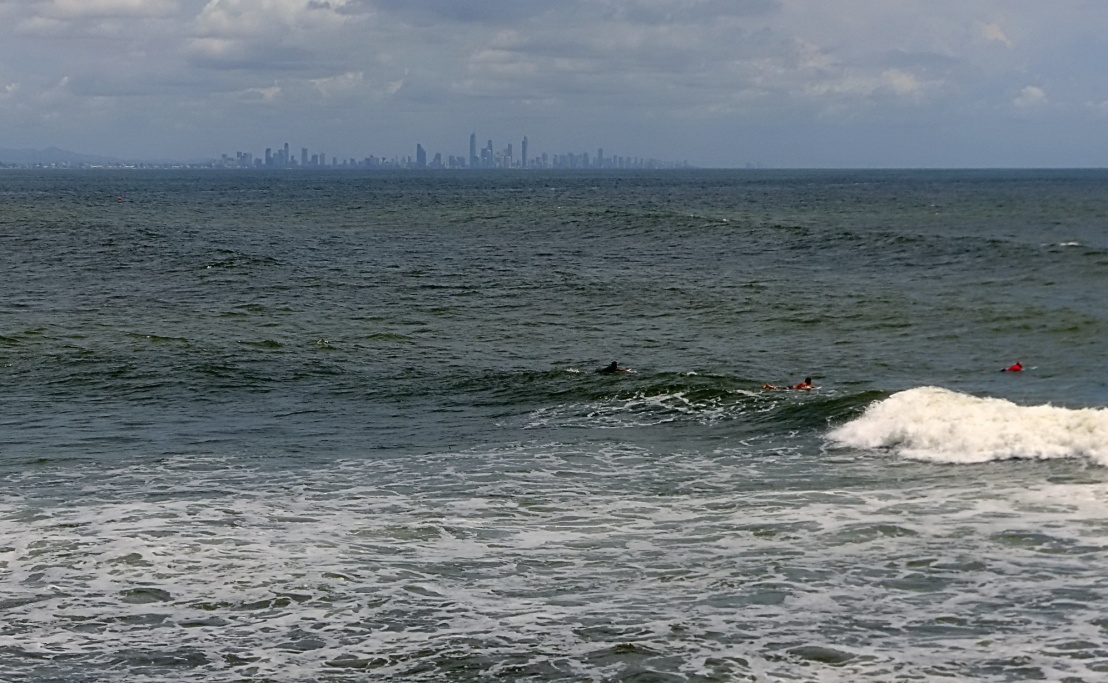 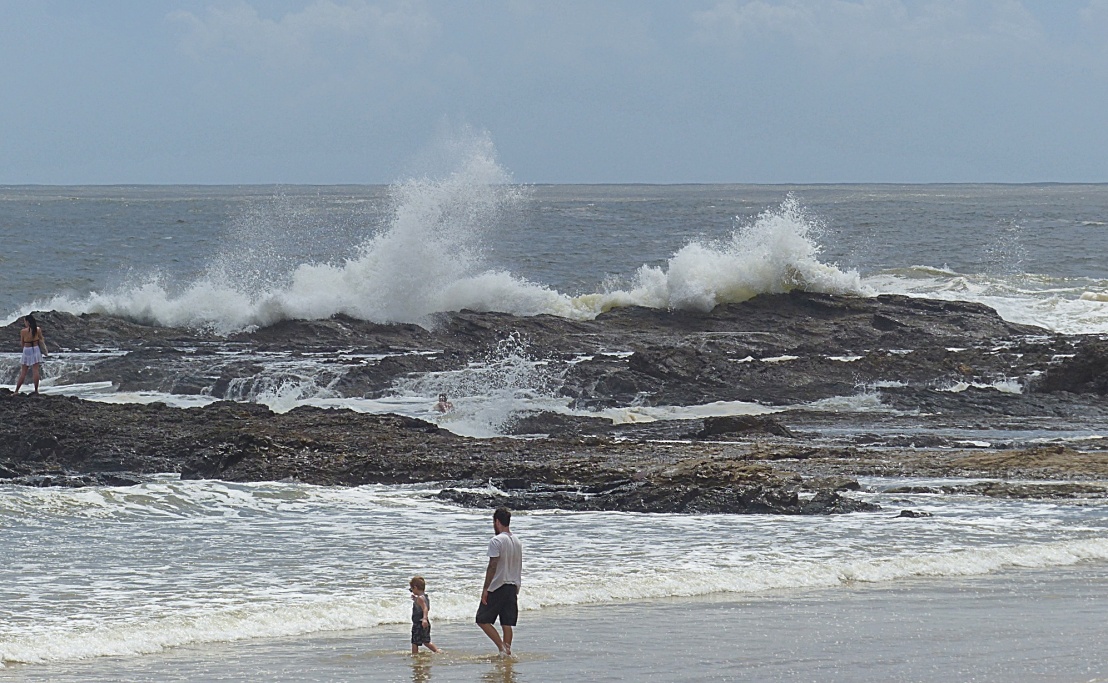 There was so much salt haze in the air, no amount of lens wiping was going to ensure all photos turned out OK. I did my best.

Next I walked to Snapper Rocks. 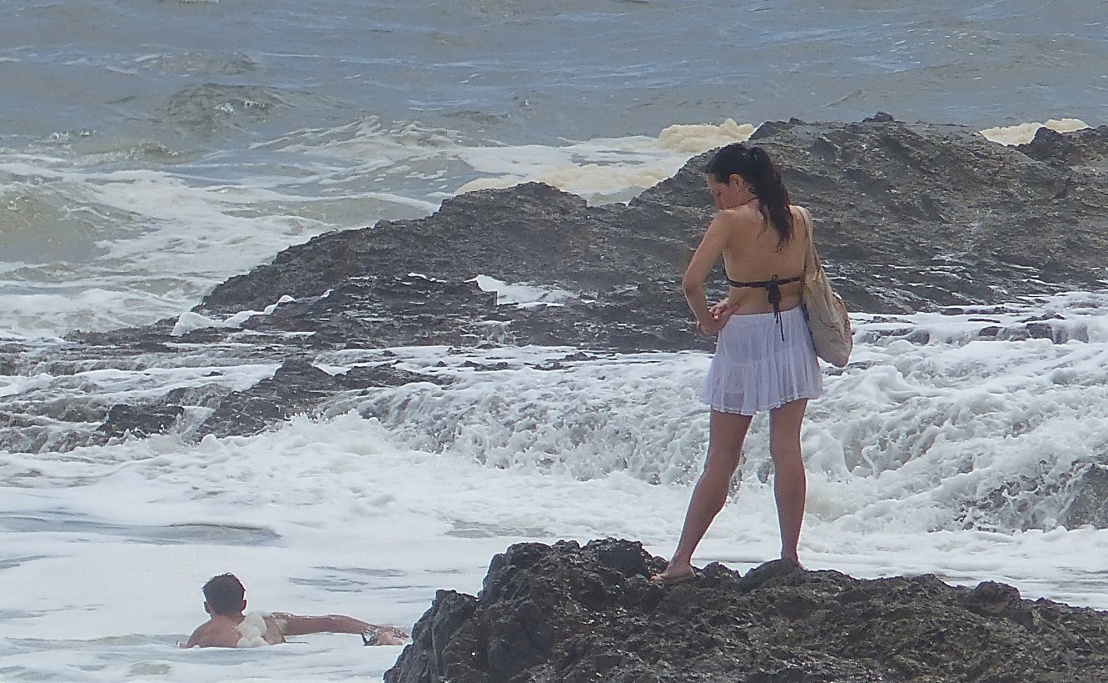 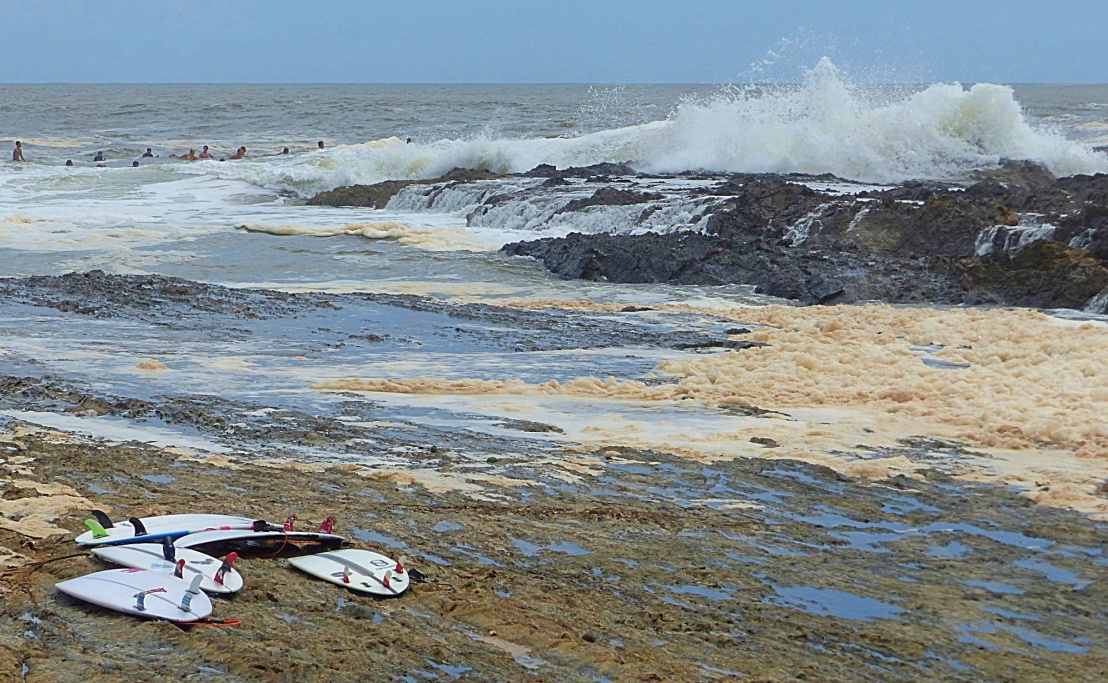 Swells are a metre to 2 metres.

Yesterday by news accounts the waves were 3 to 4 metres with occasional 5 metres.

Why wasn’t I here yesterday? 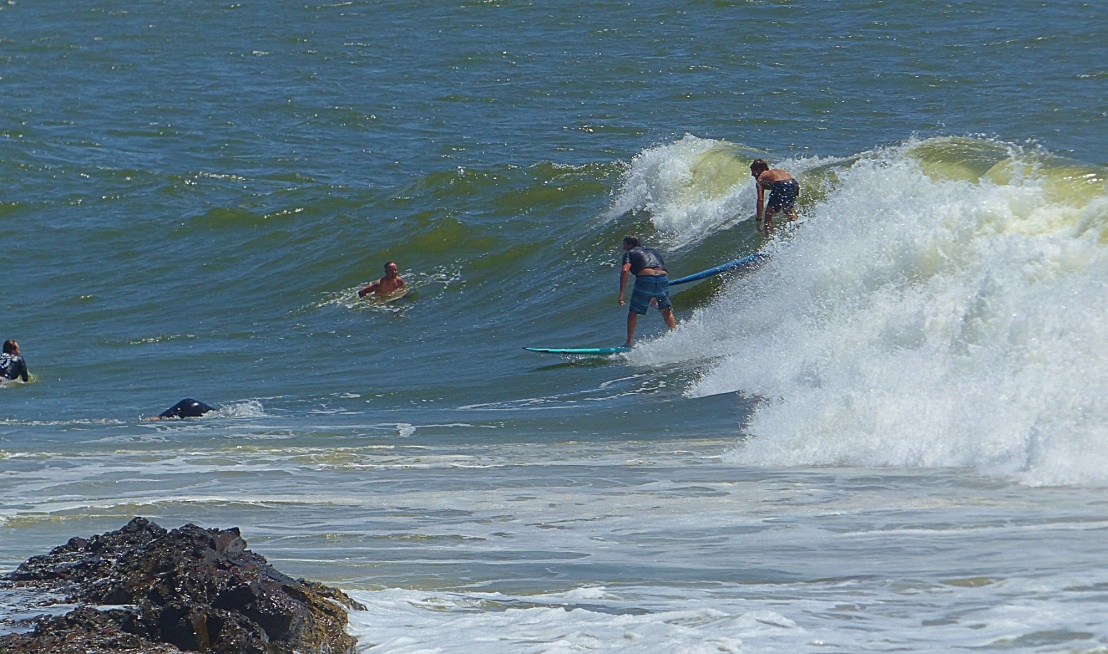 That said there were still some good waves and entertaining activity in the water and around the rocks. 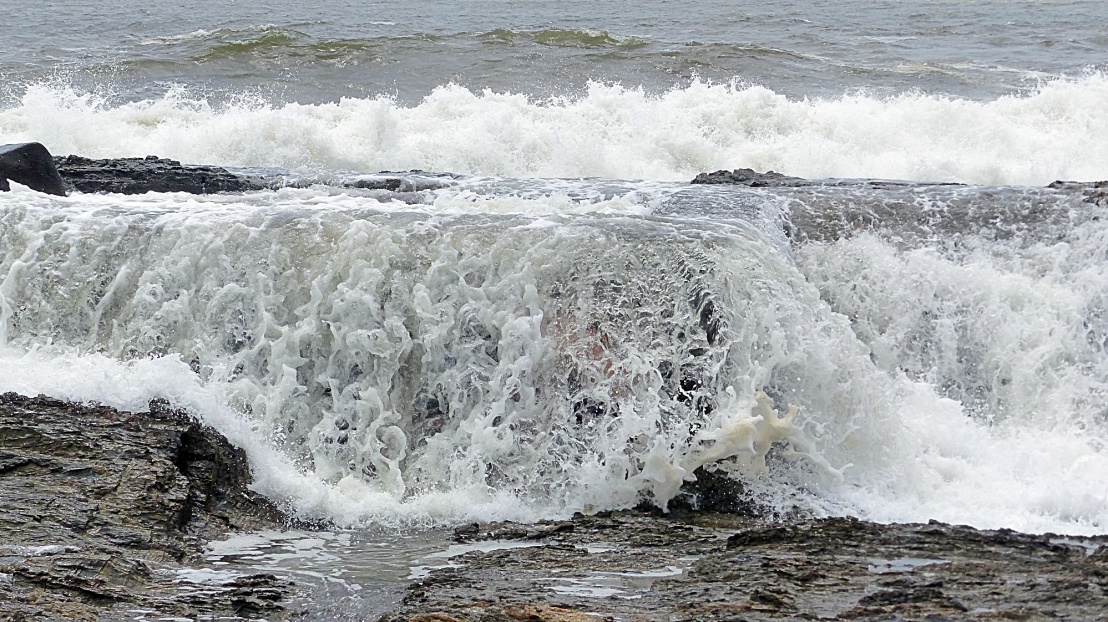 On my way home noticed fuel was still $1.17.7 at Labrador, clearly 50 cents cheaper than anywhere else on the coast. Again there were big line ups waiting. I decided to go after dinner. Big mistake. They increased the price by the time I got there.

My back pain seems to be easing at least for a period. Sitting, especially getting in and out of the car produces extreme pain. I know, the simple solution is not to get in the car. However the computer chair, the chairs at the table and my verandah chairs are all the same. Some chairs at other peoples houses are even worse. My car is comfortable compared to Linda’s 4WD. At least it seems to be easing and I have more time with little or no pain. Perhaps I have turned a corner.

On this day in 2011 I am still housesitting on top of Mt Traveston and it has been raining. Sound familiar?

Today (2011) I spoke with an old workmate, Brian. He left Oceanic and joined another insurance broker in Townsville. Brian who is 20 years younger than me had a heart attack! Sigh! You never know when its your turn.

See you next week.