This post is back to the usual format of a full week but next week may be daily posts. It depends on what adventures come our way.

This is still a long post with lots of photos.

So begins a new week here in Calgary. Donnis will be spending most of her days with her mum in the nursing home.

I am struggling with the tail end of the head cold and because of the dry climate when I blow my nose there is some blood. Yuk. Yes I know. Perhaps I did not need to tell you that. Just be aware that a dry climate can be disruptive to your sinuses. Joan has a humidifier which we need to put into our bedroom. Fingers crossed it helps me. I had no problems in Vancouver or PEI as they both have some humidity closer to what I am used to. Each morning when I wake, my tongue is stuck to the roof of my mouth. Donnis also has the same problem.

Any light exertion here in Calgary does not bother me as we are 1,045 m above sea level. However in the mountains around Golden and Kicking Horse the average height above sea level is 1,627 metres. Normal walking was OK but once there was an incline my breathing became laboured.

It is the beginning of summer but the nights and early mornings are cool to cold. When the sun does appear there is little warmth until almost midday.

Road workers carrying out maintenance as well as new projects are in full swing and there are barriers and Stop Slow people everywhere. Alberta is the corporate centre of the sand oil extraction industry. Alberta Province and particularly Calgary is in a financially healthy condition. There is an abundance of money. New buildings, new roads, new housing projects are very evident. All this work going on does contribute to traffic problems. That said, there is a bust side to the boom. Many sand oil jobs have been cut in recent months. The cost of a barrel of oil is around $60 at present. At one stage in 2016 it was as low as $26 a barrel. The loss of about 20,000 jobs in the last 12 months has meant the bottom has fallen out of the real estate market. Houses are sitting, For Sale for 12 months with no buyers. Part of the problem has been the boom when houses in new estates were being offered at the same or lesser price than an established house. (Hmmm. Sounds like the Airlie Beach real estate market)

The Province of Alberta is rich in a natural resource – sand oil. At present the oil is exported to other Provinces and more particularly to the USA. That oil is sent to market in BC and the port of Vancouver by miles and miles of railway tankers.  Alberta wants to build a CAN$7.4 billion pipeline through the Province of British Columbia to Vancouver. The pipeline would deliver many benefits to BC including reduced fuel costs. Today a litre of unleaded in Alberta is on average $1.20.3. In BC that same litre of fuel is $1.57.7 on average. So BC residents are paying roughly an additional 30 cents per litre for fuel. The BC Government has voted NO to the pipeline but demanded the oil be landed in Vancouver for the same price as Alberta despite having to be shipped hundreds of Klms by rail. Not surprisingly, there is a heated two Province disagreement which does not appear will be resolved easily. Jobs and economic benefit versus environmental concerns is no different here than it is in Australia where the argument is about coal extraction and shipping. Two sides with equally good arguments with no winners.

Today I accompanied Joan on a shopping excursion to Costco. That was an experience, sort of like watching Walmart people videos. Costco people are different. It seems going to Costco is a family event. Mum, Dad and three kids, at least one in a pram. Family groups are everywhere. After shopping they all gather at the food court area where you can have lots of food for only a few dollars (plus tax). Most of the food is high carbs, high cheese content, deep fried and highly processed. Hot dogs, giant size, sell for $1.50 while a large coffee is $1.99. Coffee comes in one size – large. A slice of pizza, as large as a regular pizza is $1.99. Mostly, it seems, the people eating here are overweight.

In the food department everything is in wholesale lots. If you want a can of mushroom soup you need to buy a carton of 12. Want cereal? It is only available in a box of a minimum of two bags. A kilo of minced meat, you have to buy a package which contains 2 x 1 kg bags.

A single person or a couple would probably spend more than they save.

However there are some items which are well priced. A pre- packaged Caesar salad at least three times larger than you can buy at Woollies or Coles in Australia for $5 at Costco is $8.99. (later when we opened the salad I changed my opinion. The Costco salad was terrible. There were no bacon pieces and the lettuce leaves were all stems.)

Shopping at Costco, especially the one we visited at Heritage Gate, which is the busiest store in Canada, is organised chaos. Staff, and there is lots of staff, are friendly and helpful. They are constantly picking up things like clothing which customers just drop on the floor. For those who do not shop at Costco be aware you need to be a member with a photo id card to gain entry. Guests must be accompanied by the member and guests cannot buy under their own name.

Another lay day for me, while it was a look after mum day for Donnis. After dinner we drove to the airport to meet Alecia who has flown in from the oil fields for a few days.

Tonight I fired up the BBQ and we invited Simone and Lazar for dinner. Joan had bought some Short Loin Lamb Chops from…Costco…imported from Australia (lamb is an expensive luxury in Canada). Alecia made a rub of butter and Rosemary. I cooked some huge sweet potatoes on the BBQ until the skin blackened and juices began to seep out and veggie kebabs on the BBQ and set them aside while I quickly seared the chops in the flames created by the melting butter. I reduced the heat and slowly cooked the chops until juices began to flow. I let them rest until the table was set. All were impressed at how the meat was pink, juicy and tender and the sweet potato just slipped out of the blackened skin. Better than throwing a shrimp on the barbie any day.

Today we took Donnis for a Chiropractic appointment. Alecia and I went for a drive. We saw a huge Church of Latter Day Saints – Mormon – High on a hill overlooking Calgary.   https://en.wikipedia.org/wiki/The_Church_of_Jesus_Christ_of_Latter-day_Saints_in_Canada 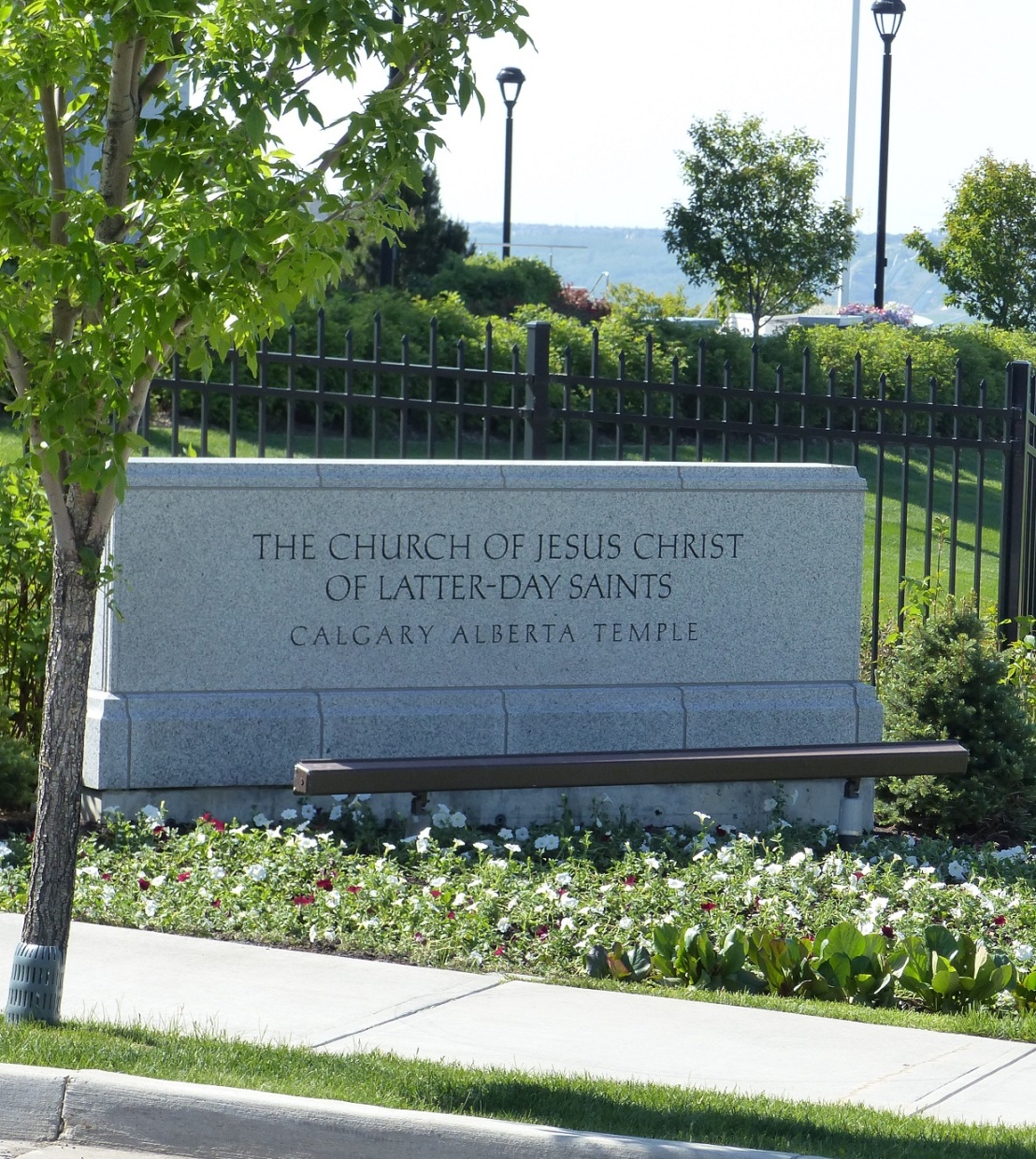 The church and grounds are very well maintained, almost picture perfect. Compared to most other churches it really stands out as an example of wealth. 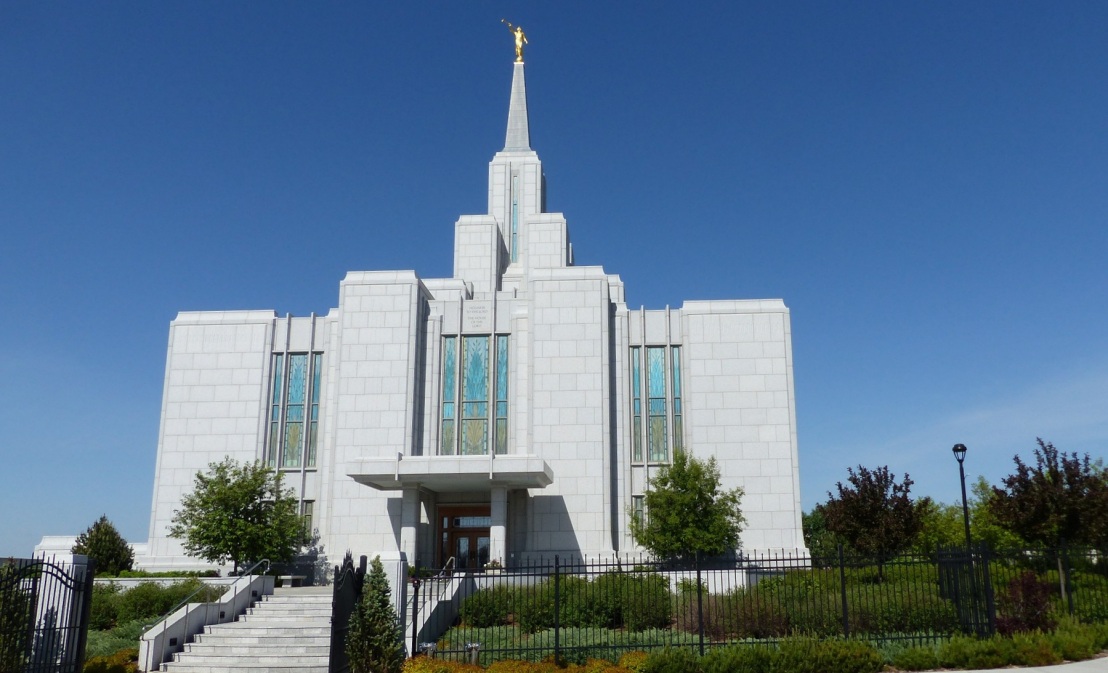 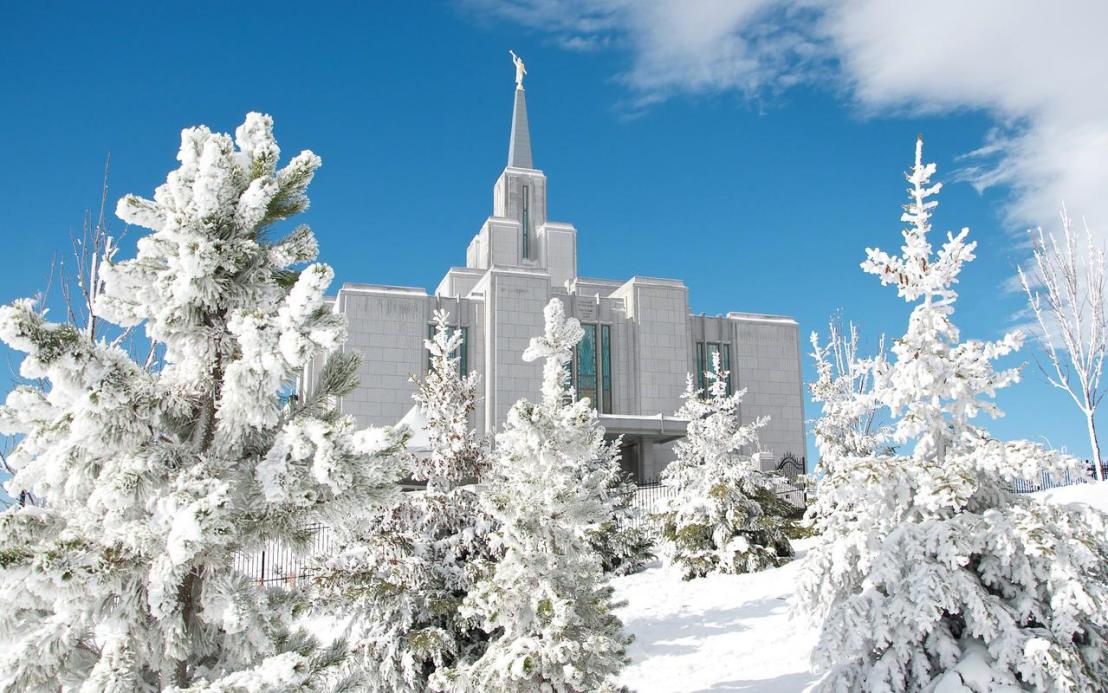 Afterwards we joined Simone, Andrea, baby Evan and young Miles for a day at Calgary Zoo.

Initially I was somewhat disappointed in what I thought was a small number of animals.

The enclosures are large and roomy and many are set up to take into account the climactic conditions the animals would encounter.

Photography was often difficult as viewing chambers were partitioned with glass which is often scratched, smudged, dirty and reflects other images.

The zoo is divided in various themes such as Canadian, African, Asia, South America and even Dinosaurs. The Canadian section includes both Grizzly 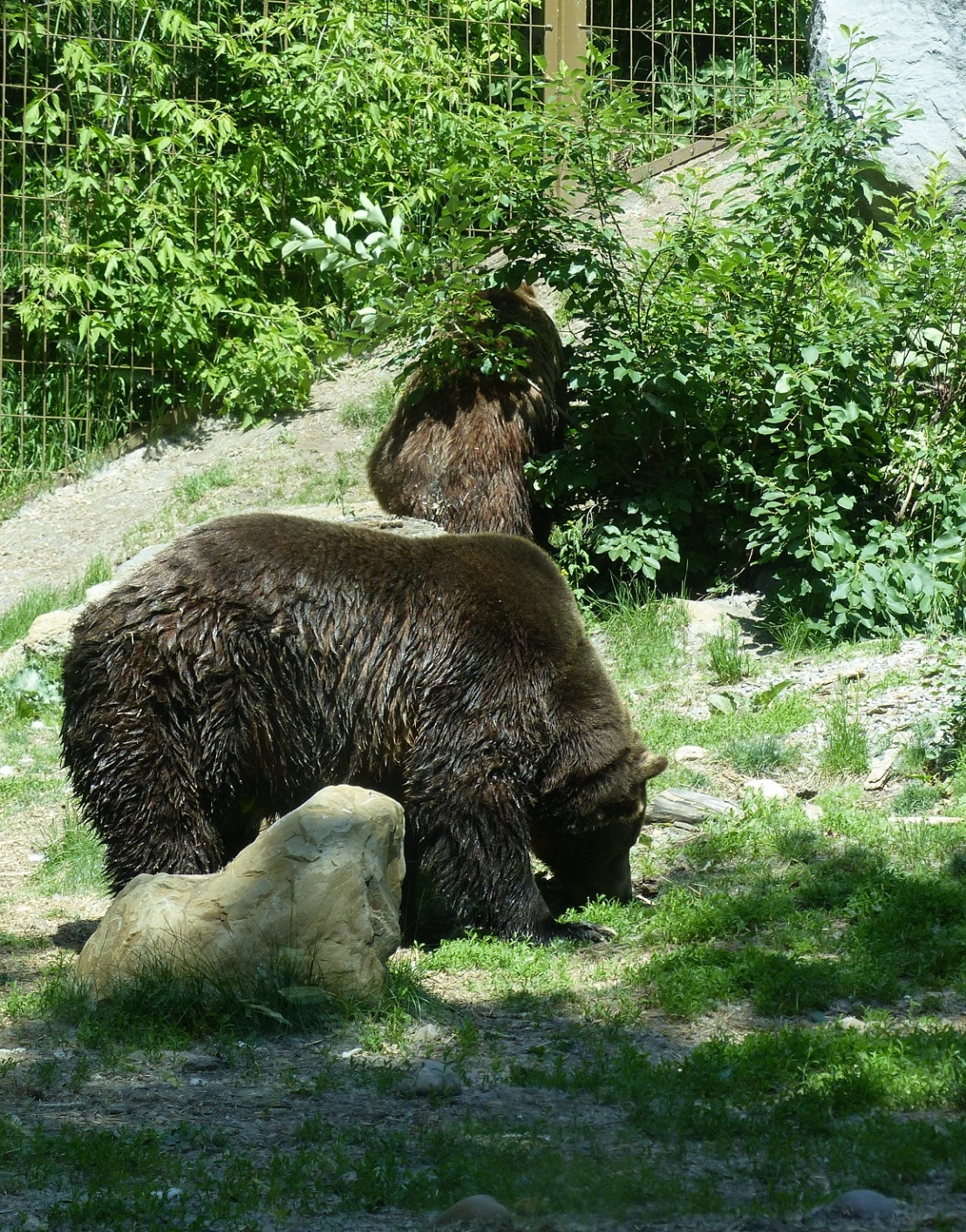 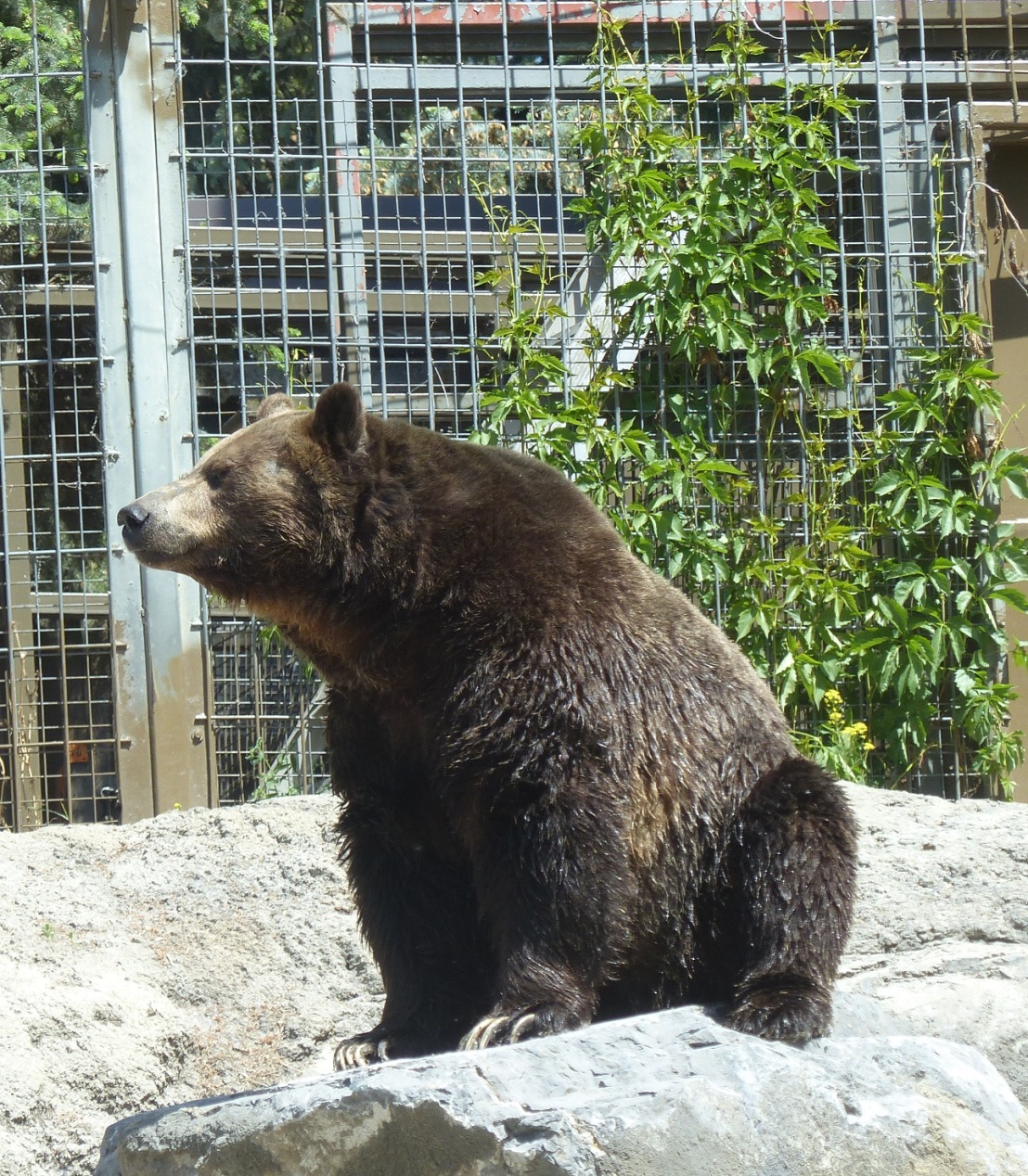 and goats of various species and even a Rocky Mountain Cougar.

Some animals, such as the Lemurs have a large almost interactive enclosure. 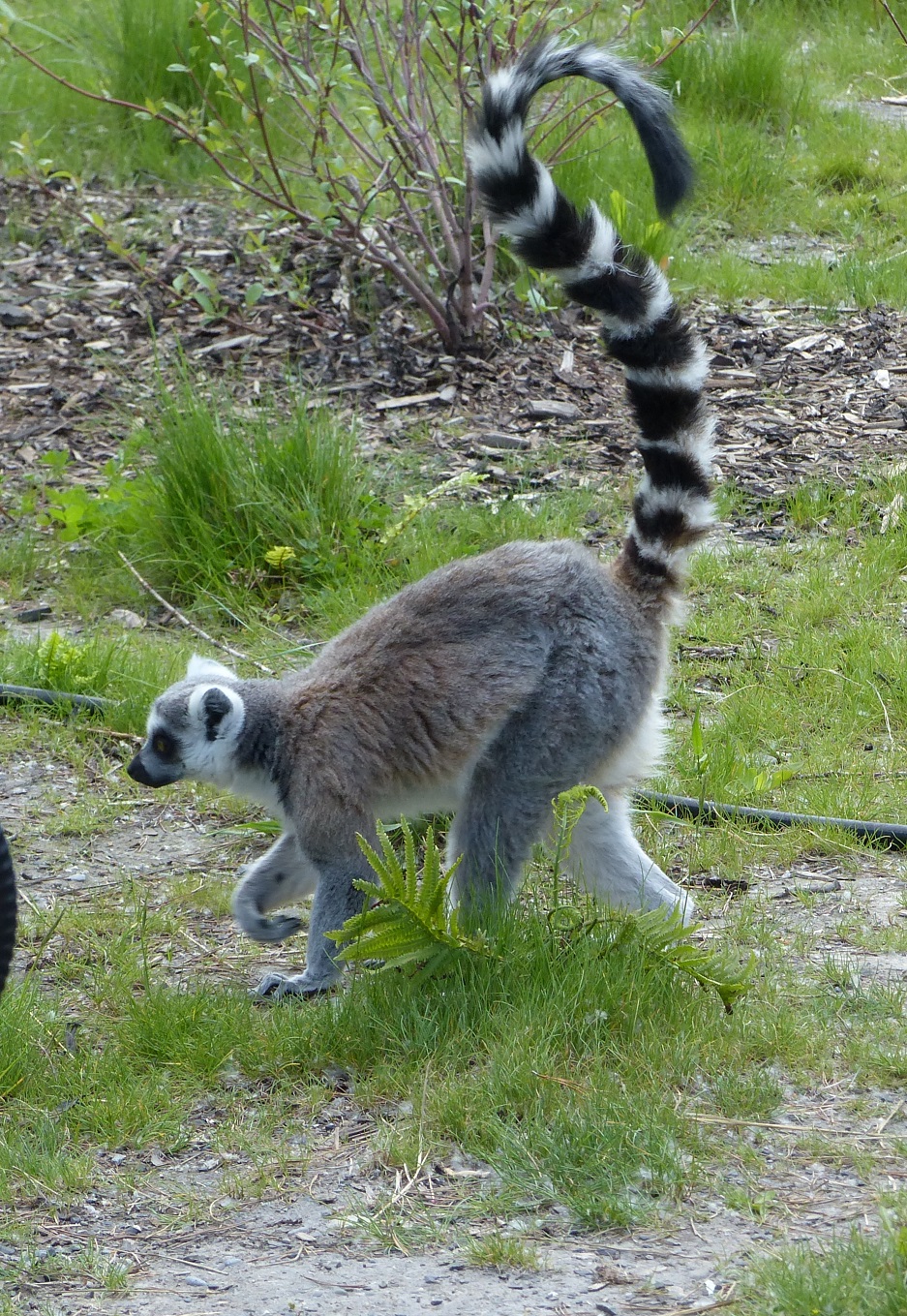 Entry is gained via a heavily gated enclosure and a bridge. An area is loosely roped off but the Lemurs are free to walk amongst visitors although crouching down to their head height or trying to pat them is actively discouraged.  Wisely the Lemurs keep their distance from humans.

About 5 years ago I visited the Western Plains Zoo at Dubbo NSW and one of the animals which fascinated me was the Hippopotamus.

There they had a large enclosure including areas of a couple of hectares to waddle around and a huge waterhole to do what Hippos do best. I was able to photograph a Hippo with its mouth wide open. Here the Hippos seemed to want to sleep a little and swim a little.

Their water hole was not all that large but was enclosed on one side by a glass wall. I guess the idea is to see the Hippo underwater although in this case the glass was covered with algae on the inside. Hippos defecate in the water and their little tail acts like a propeller to break up the solid matter in the water. The water here is murky, I guess there is a lot of fecal matter in suspension.

The butterfly atrium was a sort of habitat for butterflies as well as a display of mostly tropical plants. 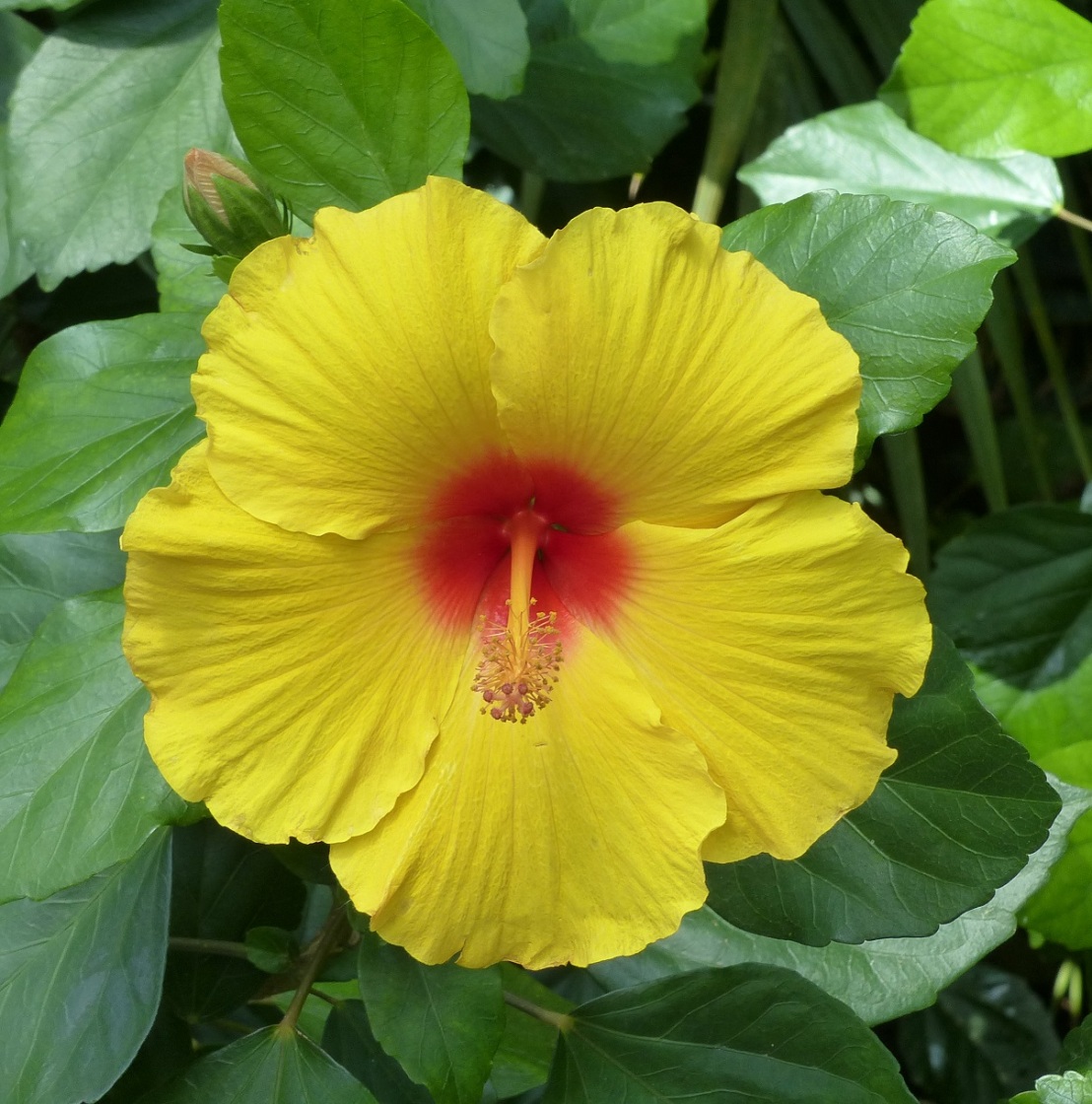 The high glass domed green house had misters set in the roof as well as around the walls. It certainly gave the display a real humid tropical feel.

One of the plants which appealed to me was the giant water lilly, Victoria Amazonica.   https://en.wikipedia.org/wiki/Victoria_(plant)

These plants are at least a metre in diameter and the spikey side walls remind me of the spikes on pitcher plants. 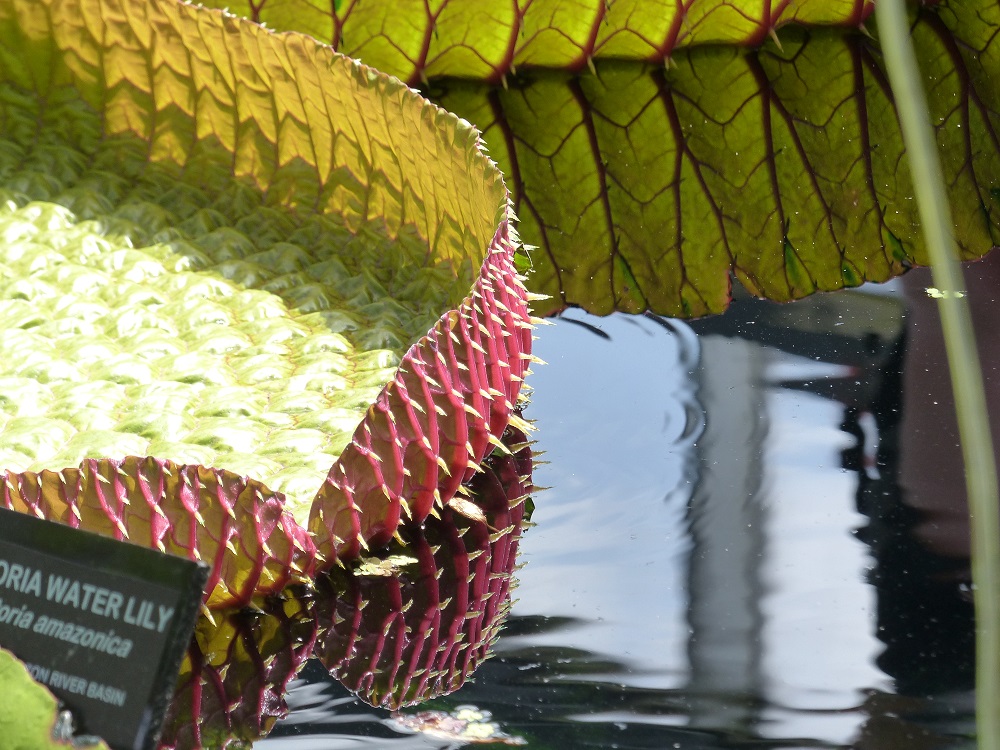 Although the butterflies live in a protected environment they still have mishaps and still only have a limited life span. Often their fragile wings are damaged yet they still fly around with grace. 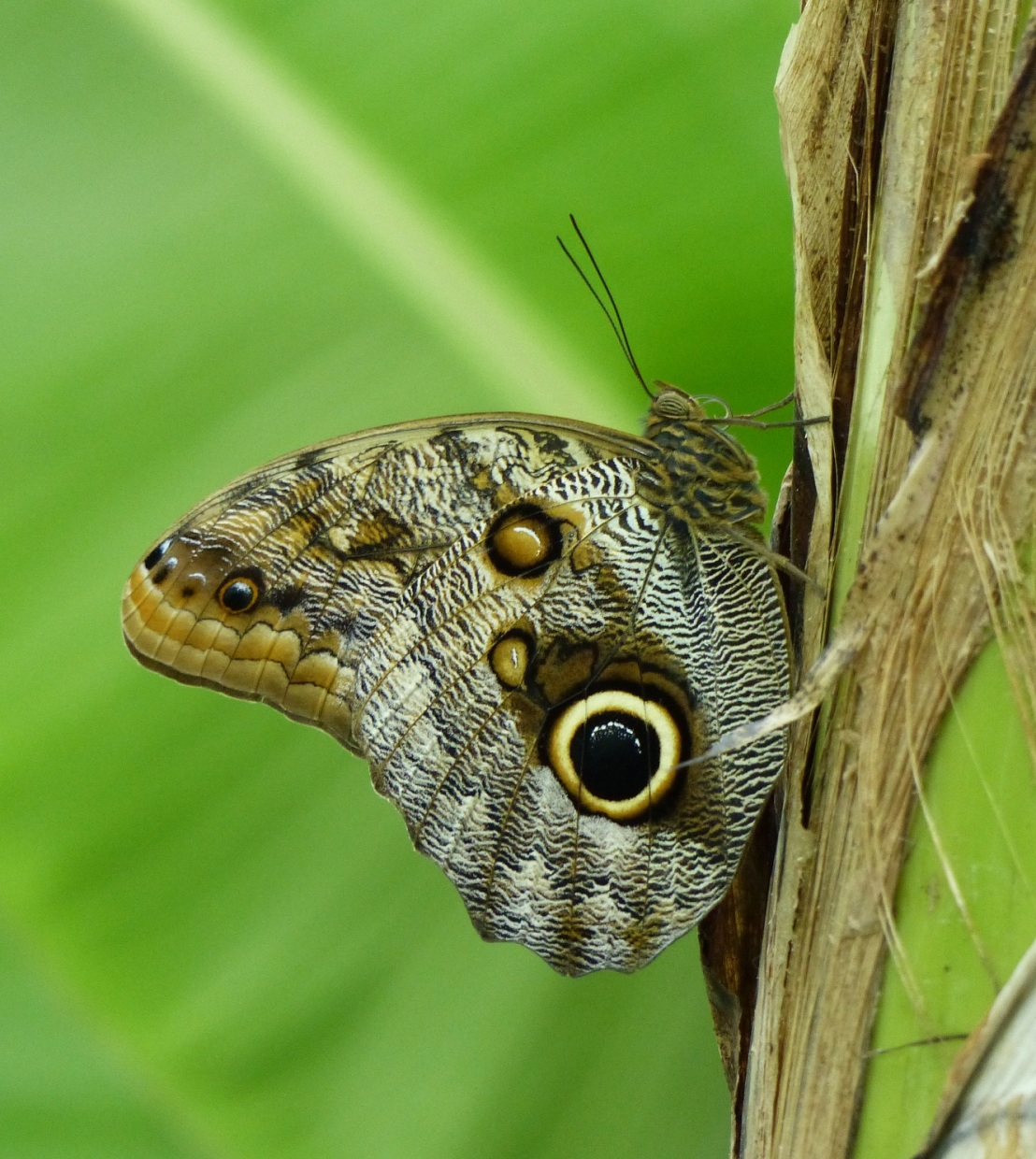 The Panda enclosure was large, roofed and noisy with hundreds of kids squealing at the sleeping Pandas. Honestly that is all they did…sleep. Even 4 year old Miles wanted to leave the Panda enclosure because of the noise of other children.

Late in the day we went into the Gorilla complex although the large male Silverback died two years ago. A young male has now been placed in the enclosure

and I was fortunate to see a mother with a baby clutched in her arms as she lay in a den like shelter under a large fallen tree.

Nearby was the African Mandrill the largest monkey species and considered Old World Monkeys. Their large sharp teeth look threatening although, apparently showing the teeth is a welcoming gesture. I am not willing to give that theory a try. Mandrills look both threatening and majestic at the same time.

A final BBQ hosted by Andrea and Brett at their home in, coincidentally, Queensland Street.

We flew from Calgary on a wet and cold, miserable, grey day, to sunny Vancouver. The original plan was Doug and Linda would pick us up from the airport and drive to the marina where we would meet Fred and Peggy and take a cruise up the Fraser River in Fred’s recently re-furbished motor cruiser. Imagine our surprise when we were met by Fred standing inside the airport. It seems Linda had rushed Doug to the hospital with Atrial Fibrillation. Peggy was waiting a few blocks away with the car. Fred and Peggy had driven all the way from White Rock, almost 50 Klms away. An hour later we were further surprised when Doug and Linda walked in the front door. Doug had had his tests, was feeling fine and would have the results in a few days.

Even after only a few hours my sinuses are already responding to the higher humidity, sea level and even some sea spray. My breathing is much better.

So ends our 6th week away from home.