I left for Brisbane Airport about 5.45 am and was not surprised by the volume of traffic on the M1. As I got closer to Beenleigh the traffic grew heavier and the speed limit if 110 Kph was down to 100 Kph. Crossing the Logan River where the official speed limit is 100 Kph.  I was soon jolted to a slow 90 then 80 and soon the traffic stopped and started until I was past the Springwood exit when suddenly the speed jumped to100 Kph and the numbers of cars reduced. Once joining the airport exit the stop start began again but soon it was back to a cruising 100 Kph. Despite the stop start and changing speeds I still managed to get to the airport at 7am and stopped for breakfast at McDonalds. I watched Donnis Air Canada plane arrive, on time, via my Samsung A3 with the FlightRadar24 App. Hmmm! The plane sat on the tarmac for 17 minutes before taxiing to the terminal. What was that all about?

Collected Donnis and she explained that 4 hours into the 17 hour flight the man in the seat behind Donnis projectile vomited at least 4 times during the flight. The plane sat in isolation on arrival while health officials boarded the plane and took the man for questioning. He claimed it must have been the tomato sauce on the past the airline served him. Nobody else got sick.

Next the cabin and passengers were sprayed with disinfectant, seat covers removed, toilet bowl was removed before the plane was allowed to taxi to the terminal and passengers could disembark. Donnis commented that the man was dry heaving during the flight and he could be heard throwing up in the bathroom. There was no sleep for passengers and it was a bad flight.

Tonight we attended a Wine & Cheese night at our clubhouse where the dress was Black and White. Had a wonderful night of good company, cheeses and other accompaniments, wine and then we played some good ole Rock n Roll (and some Line Dancing) and the dance floor got crowded. A great night enjoyed by all.

The rest of the week has been quiet with Optometrist, Doctor and Hearing appointments as well as a walk along the beach getting back into a routine…of sorts.. 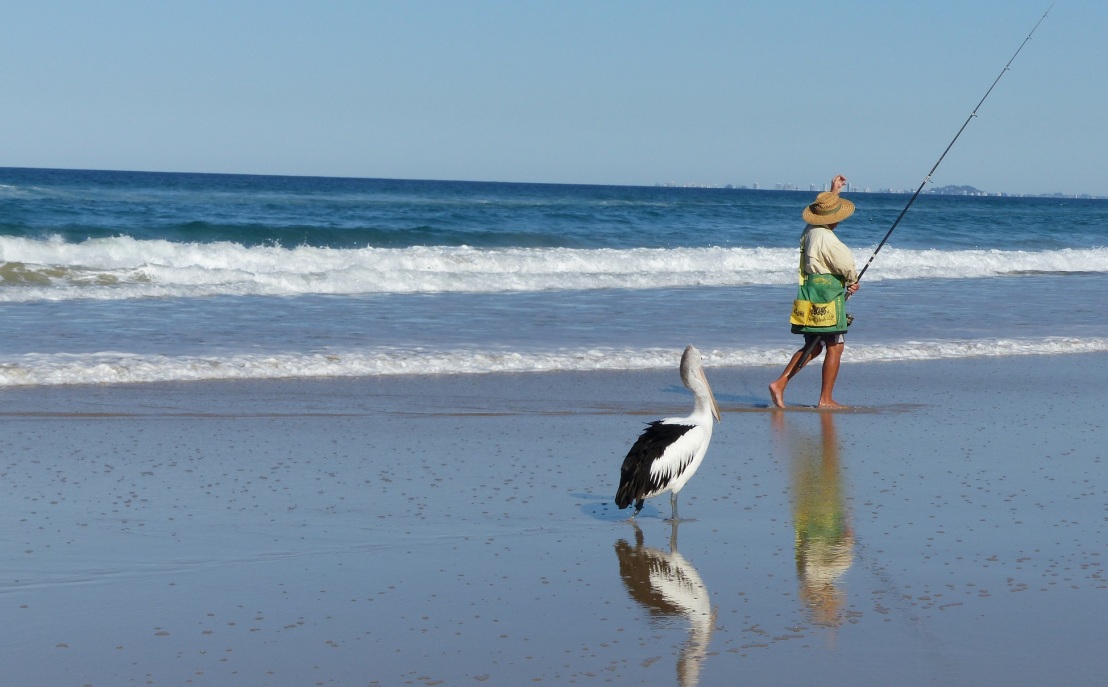 We we are planning another bush walk / climb in a couple of weeks.

BIL Ken came to stay overnight while on his way to visit his son in Newcastle.

In the morning we took my camera to a repair man to remove a tiny fleck of dust which has entered the zoom bellows and landed on the internal screen. That speck is appearing on most of my photos. (Mostly I can edit out the dark smudge but not always) We had an early lunch and a snooze before getting ready for a game of bowls. Just as it was time to leave, Ken had severe pains in his chest which were getting worse with almost every breath. I drove him to Gold Coast University Hospital where they soon had him being tested for vital signs, ECG, blood tests and X-Rays. Turns out Ken has a mild case of Pneumonia and a lung infection.

After a good night’s sleep, antibiotics kicking in and some pain killers Ken was ready to resume his journey to his next stop at my brother Allans house in Forster a couple of hours north of Newcastle.

In the morning we did our Line Dancing practise then I went to play bowls.

In the evening the village put on an Octoberfest dinner of various German Sausage and Sauerkraut with a few Aussie salads to round out the meal. Dessert was Apple Struedel. I bought some German Bier. The Rock n Roll band were back and even some of the rockers returned for a great night of good company, food, music, dancing and talking. Well, there was not much talking as the band drowned out conversation. We had a great night.

Air Canada has introduced a new service from Vancouver to Brisbane direct a couple of times a week. A family friend of Donnis, Dana, is a Hostess on this new service and we caught up with her in Brisbane.

First up we had coffee at the Mt Cooth- Tha lookout. Afterwards we visited the Sir Thomas Brisbane Planetarium.

As we walked around the circular, museum like hallway, a man caught up with us to say we are talking too loudly and there was a presentation going on next door. It turns out he is one of three Astronomers at the Planetarium. He was gracious enough to spend time with us explaining things about the exhibits and giving a private talk about the cosmos.

From there we chose a place on the map at random for lunch. It turns out that Hamilton is a well to do suburb with houses on Hamilton Hill overlooking a reach of the Brisbane River being worth in the millions of dollars. After dropping Dana at her accommodation, The Brisbane Mariott, we joined the afternoon peak hour traffic crawl for the drive home.

After a game of bowls in the afternoon I spent a couple of hours dismantling a couple of retractable awnings donated by a neighbour. I plan on re-painting the metal hood and replacing the canvas for two windows which are on the weather side of our house. We had an early dinner and went to Bingo at the clubhouse. Here was another opportunity for a couple of drinks, some socialising and win a few dollars.

In the morning I bought a sander to cut back the rusty spots on the awning hoods and in readiness for sanding the patches I have made on the walls when I find the energy and inclination to paint the interior of our house. In the afternoon I played bowls and had happy hour at the clubhouse. Sigh!

In the morning we went to the Gold Coast Travel Expo   http://www.travelexpo.net.au/travel-expo/gold-coast

We have a busy week to look forward to,