Today I want to talk about someone, a stranger, an intruder, coming into your house and stealing stuff. What is worse is they do it while you are at home.

Think about that for a moment.

The thief knows what he/she is doing. Has done it before, is probably known to the Police. All the thief wants is to get in, create two escape routes, find something to steal and escape within about 30 seconds.

This event occurred between 6pm and 8pm last night. From where I was sitting on the lounge (maybe I was dozing) I can only see a small sliver of our bedroom through the doorway and can see nothing of the second bedroom and nothing of the laundry or the door which leads from the laundry to the garage.

Donnis is in the bedroom trying on clothes and I can only see her moving around as she moves in and out of view. Mostly, unless she comes to the bedroom door she cannot see anything either.

The thief has the element of surprise on their side. They came into the house knowing they might encounter the occupants. We, on the other hand would be in total shock trying to understand a stranger in our house perhaps even one who is armed. Access was most likely the wide open garage door then through the laundry door and first bedroom on the right, finds two handbags, grabs them and is gone. Neither of us saw or heard anything.

We did not know the handbags were gone until today when we were going to the doctors. Donnis went to get her handbag and it was gone.

While driving to the doctor we phoned the bank and cancelled the credit/debit cards. Unfortunately they are both on the same account so my card is also cancelled. Grrr! We have no access to funds until the new cards arrive.

We have reported it to the Police, the property owners, our own Home Owners Committee and neighbours. Nobody saw anything.

Forensics arrived, dusted for prints and found NO PRINTS, not any at all. Every surface was wiped clean and the Chux cloth thrown on the car windscreen. This type of theft is pretty common these days.

This afternoon I spent a couple of hours with friend Val R who has priced out some CCTV equipment.

Today I spoke with the land owners and they are looking at additional security measures but nothing has been decided. They have priced a drone which fly’s the boundary and roads within our village every 20 minutes and records what it see’s. That is an option.

I decided to walk the bank of our creek frontage, about 150 metres, with river gums, casuarina and mangroves growing along a steep bank. I hoped to maybe find Donnis handbag.

I did. It was still floating in about a metre of water at high tide. Her phone earbuds were dangling from a casuarina branch and her glass cleaners were on the ground. The handbag was empty. I went back two hours later as the tide turned but it was still too deep and murky to look for the cards or her card wallet. I did find another wallet belonging to one of the residents here. He had not reported the loss to the Home Owners Committee but may have reported it to the Police. I will go back at 7am for the first low tide to search amongst the rocks.

Donnis went to Motor Transport and reported the loss and applied for a replacement license.

The loss of the $15 is something which you cope with but on top of invading our privacy comes the cost of replacing the license, $75, being without our credit/debit cards and the replacement of Medicare card, Pension card, Fly Buys cards and all the rest.

One of the hottest days of the year. It was easier to stay home and keep cool in the air conditioning. We packed a suitcase ready to leave tomorrow.

I continued to research CCTV and decide that if I proceed what is the best way to install and where to install. I do not want to drill holes in the ceiling or floor but believe a hole in the floor may be easiest with all the cables fed through the one hole.

Up at 5am and we were on our way by 5.30am. Today we drove to Brisbane Airport but first stopped at Gateway Airport Parking. This is the first time I have ever used such a facility. i30 will be parked under cover and they will drive us to the airport and collect us when we return. The cost is only $74 for 5 days. I compared that to catching the train to the airport which is $30 each, each way. A total of $120 and we still have to find our way to and from the train station. No sooner had we arrived and unpacked our bags than the shuttle driver was ready for us, packed the bags in the back and we were at Jet Star ticketing 10 minutes later. Although on stand -by we were issued tickets immediately and even had time for breakfast.

If we thought Brisbane was hot we were in for a surprise at Mackay. Hotter and more humid. It was energy sapping. We caught the bus into town and I collected sister Shan’s car from her work then drove to Canelands for lunch in air conditioned comfort.

Mackay has suffered with the heavy rain over he last 10 days. Although the rain was not as heavy and prolonged as further north and west,  (they still had 1.4m in 24 hours) there was some minor flooding and some damage to local roads. The rain contributed to the extreme humidity.

We took the borrowed Mazda 3 and drove to Airlie Beach to meet with a Real Estate agent and to do an inspection of our house there. I always come away feeling dejected. Although Donnis is happy, the inside of the house is well maintained and clean I cannot say the same for the outside. We have a lot of trees around the property and the roof and guttering is full of leaves and palm fronds by the dozens are littering the pathways and once again bushes have completely overgrown the back of the garage. It is annoying that tenants will not carry out any work other than the simplest cutting of the grass. Donnis suggested  – half jokingly – maybe we should just move back but I no longer feel like being a slave to yard work.

We had a pie at Cannonvale Centro Shopping Centre and were amazed to see Lou Tuck a Marine Surveyor, Himalayan hearing advocate, yachtie and all round hippy. Although we both knew each other we had forgotten each others names. Lou makes a trek to the Himalaya’s each year to support free work being carried out to provide hearing aids to the locals. Lou also just bought himself a new 35 Beneteau Yacht. I always liked Lou and got along with him despite many people avoiding him. Lou has always been an individual, always wearing grotty yachty clothing, no shoes, very opinionated and loud. He has changed. Today he was wearing shoes.

Afterwards, and before heading home we drove to Cedar Creek Falls as I expected it would be pumping after all the recent rain.

It was falling but not pumping.

The word is out though as there were many backpackers enjoying the falls and the clean water and just somewhere cool to laze around.

I was pleased none had climbed to the top of the falls where, in the past, young heroes have jumped to their death.

They all seem to forget the rocks just under the surface. 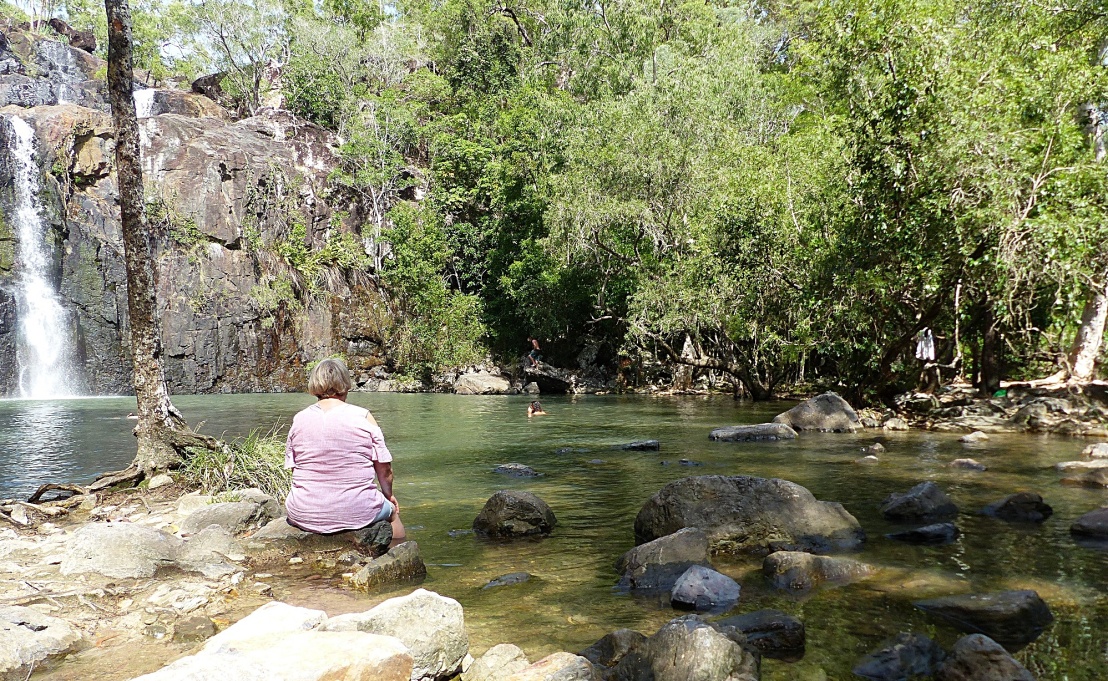 That’s odd! I woke with a splitting headache which seemed to get worse as the day wore on. I also felt my appetite had disappeared. A sore throat has joined the other symptoms. We met sister Enid at Canelands Shopping Town for a coffee. I struggled with the coffee. No, there was nothing wrong with the coffee, I was unwell and felt bloated after drinking just half the coffee.

We went back to Shan’s house and I had an afternoon snooze.

By the time I woke I knew I had either a head cold or worse a dose of flu. We drove to Mackay and went to a restaurant on the riverside, called Ashtart, a Lebanese inspired eatery.

We were there for my granddaughter Shelby 18th birthday.

Unfortunately whatever it is I have, got worse and I struggled to drink a beer and only had two bites of a kebab. My taste buds AND appetite had both run away. The smell of meat, herbs and spices cooking did not make me hungry at all.  All I wanted to do was curl up in a fetal position and sleep.  I’m sure Shelby had a great night surrounded by family and friends. I was too ill to be a part of her celebration. We left by 8.30 pm.

I had a rough night and the day didn’t get any better. I dozed frequently and Donnis kept insisting we cancel our flight home and wait for me to get better. I would rather be sick at home. As the day wore on Donnis was looking at alternate plans to stay longer and seek medical attention in the morning. On the other hand I want to be well enough to travel and be sick at home in my own bed.

Shan made dinner but I was still not well enough to eat more than a few mouthfuls.