This is the day the TV commentators have been haranguing (there’s another first time word for your wall collection Geoff) us about for the last 6 weeks.

But before the game began…

Frank has been quietly harassed by several village residents, INCLUDING DONNIS, that I should start playing bowls. In fact I did play a game last week with a borrowed set of bowls. On Tuesday Jim knocked on my door and presented me with a case with four used but matching, bowls. Is that a hint, Jim?

Today I fronted up for a game, we each drew a number out of a large jam can to determine teams. Learning to bowl with a ball not shaped like a ball but has a slightly wobbly round shape is not easy. Add to this, the bowl is weighted on one side (called a bias) so it travels in an arc. Place the weighted side on the wrong side and the bowl takes off across the bowling green knocking into bowlers on the adjoining green. Apart from the bias bowl there are many rules, rules of etiquette, personal ways of doing things and local etiquette. All this is to be learned in one afternoon session. My partner, Bill and I lost by a very sizeable margin. Thanks for the game. I might join in on another day.

For dinner I made a simple pizza so I could sit down, alone, to watch Game 1 of a three game series, of the State of Origin played at NSW premier sportsfield, ANZ Stadium. Although Queensland had won 9 of the last 10 series encounters, somehow NSW were placed as favourites and all the jokes on Facebook were basically one sided, NSW against Queensland.

By half time Queensland were leading 6 to 4. It was a dour game of physical grinding backwards and forwards with the ball. Near full time both teams looked physically spent. At one stage it looked as though NSW had scored a try. The video referee looked at all camera angles at least 27 times before deciding it was a NO TRY. As the final hooter hooted and the referee whistled with his pea whistle and called full time, the score was unchanged. Queensland won by a bare margin, 6 to 4.

So, I guess, from tomorrow onwards the Facebook jokes will be at the expense of NSW.

The Weather Bureau has issue a severe weather alert for the entire east coast of Australia. A low front is expected to roll in from the north bringing gale force north easterly winds and heavy rain up to 300mm. For the Gold Coast the prediction was it would begin today and gradually increase in intensity as it moves south. Seas were expected to be whipped into a frenzy and all beaches will be closed. Local flooding and wind damage is to be expected. Today it rained and the wind was strong. The rain got heavier, on and off as the day continued.

Our friend Glenda invited me to dinner at Worongary. After dinner we watched a movie – Money Monster – and I drove home. The rain was coming in squalls but thankfully there was not much traffic even on the M1. Closer to home there was water across the road in a few places, one of which caused the i30 to aquaplane but that scary moment passed and I was soon home vowing not to go out the next day…for anything.

The rain increased overnight as did the wind and true to my word I did not leave the house. News reports tonight indicated rain, in places on the Gold Coast was well in excess of 200mm. Wave heights were generally around 3-4 metres with some being recorded at 10metres.

The forecast for tomorrow is the wind and the rain will ease and stop altogether and will be replaced by sunshine and a strong westerly wind. The westerly will tend to hold up the waves and gradually flatten them.

Woke to brilliant sunshine and the westerly kicked in about mid-morning. Official rainfall at Coolangatta Airport was 300mm while at Springbrook in the mountains, 350mm fell since Friday. The storm front continues its slow way south and already places Like Lismore in northern NSW has flooding and houses evacuated. Further south Wollongong also experienced local flooding. It was time to visit the Gold Coast Seaway and The Spit to see the big swells.

Hmmm! It seems that thousands of other people had the same idea. Although the danger on the spit was minimal people brought new born babies, their dogs, children in prams and people in wheelchairs.  The pathway to the lighthouse at the end of The Spit had a constant stream of people many with big professional cameras to record the event. 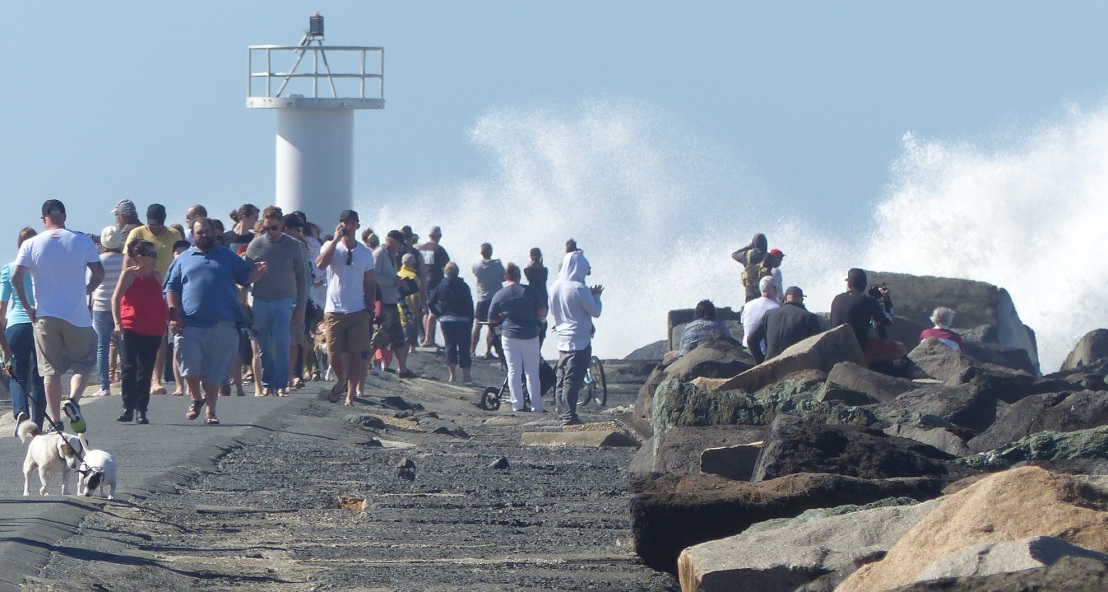 Probably the worst damage on the coast is beach erosion and a seafood restaurant beside Burleigh Beach had plate glass windows smashed in by waves and water ran through the building. Some houses with beachfront lost a little more of their yards. What the sea giveth the sea taketh away!

The day remained sunny but the westerly wind gained in intensity and became quite cold in the afternoon.